A Blog on the journey out of Lockdown:

Can bereavement theory help us as we come out of lock-down?

The announcement today by Dignity Funerals that they are launching a new national service of direct cremation is a bit like the proverbial curate’s egg – good in parts.  With the average funeral costing £3675 according to the recent Royal London[1] report anything which offers a reduction in that cost is to be welcomed. At first glance, the new service will give bereaved relatives the opportunity to arrange a funeral anywhere in the UK for just £1495.  For anyone on a low income, or for whom a funeral is a low priority, that must be good news.  Mustn’t it?

Well, yes and no.  What you get for your money is basic.  Collection of the deceased, during working hours (but of course people die out of hours too, and there is to be an extra charge for out of hours collection); care of the deceased in one of Dignity’s funeral homes, and then a cremation at a time and place decided by the Dignity, with no provision for anyone to attend that cremation.  The ashes will be returned to you, or scattered at the crematorium. Oh, and unless you live in Scotland, you will also need to pay the Doctors’ fees for signing the application for cremation – an additional £164.

Even with those provisos, Simplicity Cremations appear to offer a good deal, backed by the Dignity guarantee of quality which they claim is next to none.

But what you don’t get for your money is equally important.

A funeral is much more than just the disposal of the body.  A traditional funeral offers four things

1. Disposal of the body 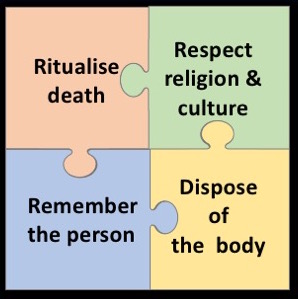 While disposal is the only legally required item in this list, I believe the others have an equally important role to play.

Remembering the person focuses on the narrative around the person, and is given expression both in the spoken words of eulogy and in shared memories, and in what Bailey and Walter[2] call the “relational eulogy” of the presence of others, which bears witness to the importance of the deceased in the lives of other people.

Ritualising the death covers issues such as witnessing the separation from the deceased (as the coffin is lowered, or the curtains are closed) and the creation of a permanent memorial through the memory of the ritual, be it a high church service or the planting of a tree.  Respecting the death in this way can also contribute to clarifying the personal, and public, attitude to death.

Relating the death to religion or culture fulfils a need in some, though not all, to set the death within a framework of belief, such as relating it to the after-life, ensuring a place among the ancestors or giving hope of future re-connection or re-incarnation.

As Neimeyer[3] and others remind us, a key part of grief work is to find meaning and seek to make sense of the death, and these aspects of the traditional funeral would appear to contribute to that. If I am right in that surmise then it is important to find ways of mitigating the effect of dis-aggregating the funeral.  As a first step it might be important to suggest to families that they consider arranging some kind of additional event, ceremony or service where attention can be given to these important aspects.

In launching Simplicity Cremations, Dignity has taken the funeral apart – separating out the what they can easily deliver.  But they, and other companies which offer this service, have a responsibility to the bereaved families to indicate what else should be considered.  Information is urgently needed for families going down the direct cremation route as to how they can devise and deliver ritual, remembrance and religious relevance in order to lay a foundation for a more positive outcome in their grief.